FUNICULAR AT THE TOP

Unique in its kind in the country and completely built in San Carlos de Bariloche, the Funicular at the Top, located at the top of the mountain, allows every visitor to enjoy mountain activities in greater comfort. 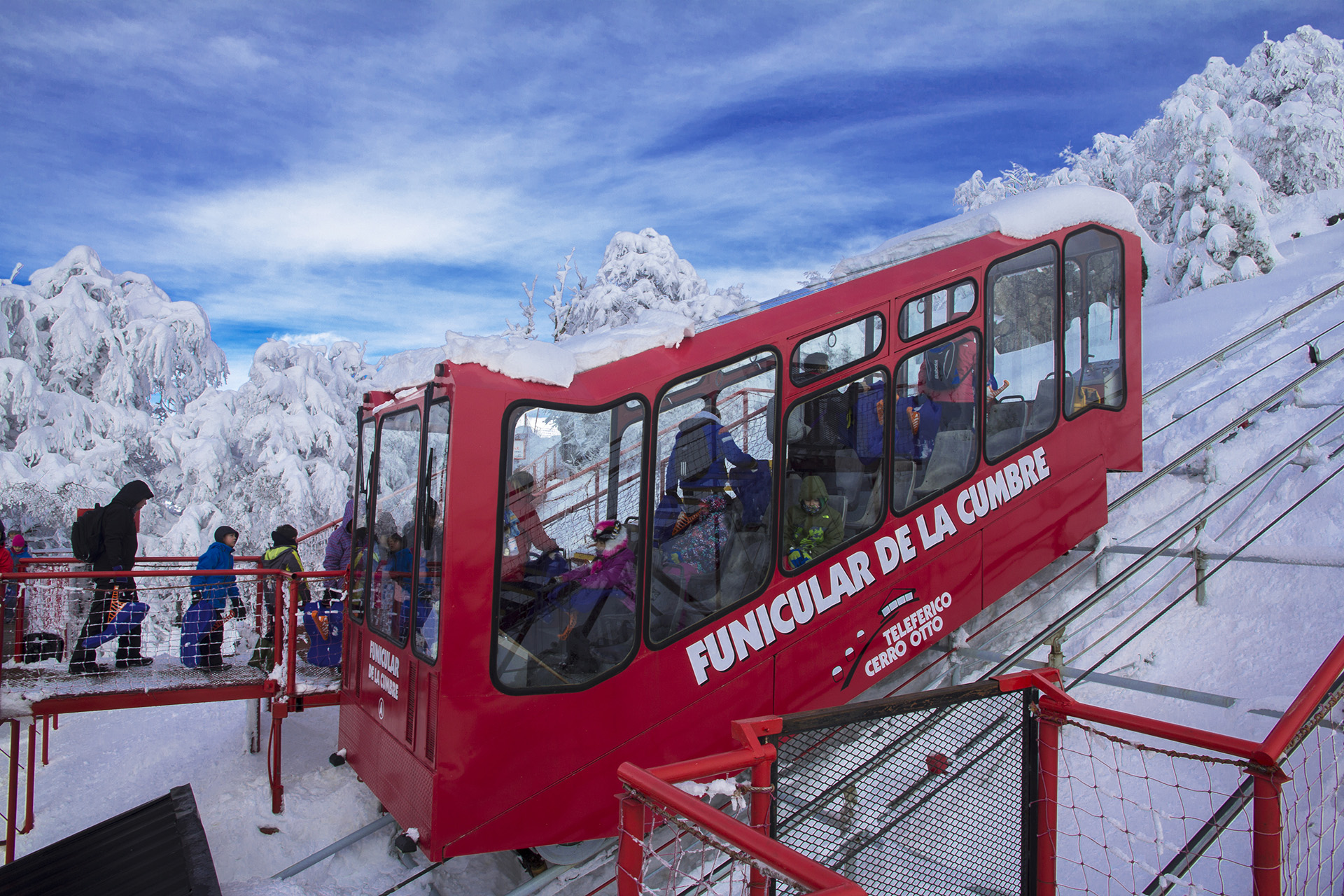 Funicular at the top

With the Funicular at the Top, passengers will be able to enjoy a lot more of all mountain activities!

It is a modern transportation system that transfers tourists from the end of the sled tracks and/or Otto Kart (inflatables) route back to the start.

Unique in its kind in the country and completely built in San Carlos de Bariloche, the Funicular at the Top allows the visitor to enjoy mountain activities in greater comfort. Under strict safety and quality standards, the Funicular was built with local engineering and manpower and required a $ 1.500.000 (ONE MILLION AND A HALF ARGENTINIAN PESO) investment.

Since its opening, in the Winter of 2007, passengers, that until that moment had to ascend on foot back to the start of the tracks, can do so in this modern mean of transport while enjoying the scenery, since its bodywork is completely glazed.

With this system, you can make a better use of the time spent at the top since you avoid having to return to the start on foot, as it was done before its construction, through stairs parallel to the tracks that, while they had their charm, required a certain level of physical demand to overcome the different slopes of the mountain.

The Funicular consists of two units, with up to 30 people seated each, circulating on rails pulled by a pull cord. They can transfer up to 800 passengers per hour. It is important to point out that this was a project developed exclusively in San Carlos de Bariloche, with own designs.

It is a funicular that moves both up and down, circulating in two rails, pulled by a pull cord (with a security factor equal to five times the required), with two stair-like carriages -counterbalancing each other- thus minimizing energy consumption. Each carriage has three rocker arms with two wheels, each operating in parallel, which allows the respective shafts to support the bearing structure to which the cabin is assembled.

Each one transports up to 30 people seated, covering a distance of 170 meters at a 3m/sec speed, being able to transport up to 800 passengers per hour and support a maximum weight of 3000 kg from passengers, plus the weight of the vehicle, which is also 3000 kg.

With a Siemens engine and a Hansen speed reduction gearbox, the funicular is equipped with strict safety systems: switches, breakers, emergency and service brakes, anchorage and foundation control, welding and adjustment, tensioning system and inline passenger rescue, among other regulations required by the OITAF.

Regarding speed it has a device to control it instantly (Semicron), which responds immediately against possible peaks and uncontrolled accelerations.

If for some reason the operator could not press the switches, there is an alternative security system "dead man" like, that cuts the energy supply through the serial safety circuit that, by relays, cuts in turn the main energy supply.

In the same way and taking care of every possible detail to secure passengers and operators, the funicular has anti derailment devices, passenger rescue devices, according to standards, night rescue lightning equipment and illuminated signs for every situation. Operating cabins have direct or indirect vision of the stations and the line, so the operator does not have to leave its workstation and the motor systems, electromotive and high voltage are protected from climate actions, but also from public access, to avoid any type of accident.

It also has a braking system composed from two automatic brakes, independent (one for operations and another for emergencies) with a braking acceleration average greater or equal to 0.4 m/sec. In case the brake is automatically activated, the drive system will also be activated. The service brake is automatically applied when: a) the safety line devices are activated; b) the engine power is cut; c) the line speed is greater or equal to 10% its normal value; d) against excessive changes in the driving torque and d) with manual actuation from the staff using a push button panel. The emergency brake acts directly on the driving pulley, regardless of the service brake, manual and automatic, it automatically stops in accidental reverse and the staff can activate it manually from the base. When there is an over-balance (for example due to gusts of wind) the system also automatically brakes, and in case of abnormal operations, it is informed to the public on speakers. The locking brakes are located above the rocker arms of the extremes, and the middle rocker arm has a suspension system (leaf spring like) to absorb the changes in the slope during the journey.

It also counts with guardrails and all the tools and methods indicated in the quality standards for machinery maintenance.

All of the towers are made of steel with fixed maintenance supports, with corrosion protection structures, reinforced concrete bases and it has an easy access to the rocker arms through the towers. It is noteworthy that new materials have been used for the wiring system, with corrosion and abrasion degrees considered null by inspections carried out during the construction phase.

The three clamping jaws, the lifting gear elements that nowadays are locked with a critical eye, are protected against accidental openings.

Regarding communication, a vital thing for protection and safety of both passengers and operators, every last detail has been taken into account: there are telephones between stations, speakers with independent power and radios, that in no way interfere with the signal from the safety line. Each station also counts with lightning rods, the main power source uses direct current so there are no major risks of electrocution, and daily, before the first trip with passengers, a test is performed to check the absence of noises and mechanical impacts or any other problem, and to check that the safety line is in perfect conditions. Similarly, there is a weekly check up and there is a vehicle available to go to the mountain for maintenance operations of the towers or rocker arms.

The floor of each carriage is stair-like and it varies at most 2° from the horizontal in its entire journey. They count with a laminated glazed surface that is 2 x 3 mm to support the weight of the snow, and it also has lateral openings and vents. This type of structure also allows observing, film and taking photos of the magnificent postcard that can be seen throughout the journey, turning the trip into something more than just a matter of comfort, it also becomes a pleasure ride.

Inside each carriage there are two control panels. The top one, which basic functions are: a) door drive, b) wipers, c) lights and d) parking brake and its reset. The lower one has the same functions than the top one plus pressure indicators and a bypass valve. Looking for the highest simplicity possible, the system operates on the basis of three fixed speeds, as follows: speed selection, for what the entire system needs to be stopped; choosing the speed after defining which carriage goes up and, if there is no alarm selected, the system enables its function.

Speed change, for which the system must be stopped and reset as in the previous point.

These mechanical-type contacts are protected in IP67 cages, and powered by means of a bar joined to the brake and, when it passes through the contact, triggers the lever giving the correct signal. This mean of transport requires, in addition, compressed air through 6 tanks mounted under the floor in each destined carriage, two of them to unlock and lock the emergency brake and, the remaining four, to carry out doors closing and opening operated pneumatically, horn, and wipers.

The refill of tanks is made in every station, keeping filters and dehumidifier gel to guarantee the service at extreme temperatures.

For emergency situations, each vehicle has an emergency hammer, an extinguisher, a first aid kit, manual opening of the door by releasing pressure on them and other valves, manometers for command pneumatic operations, apart from electrical lighting and acoustic signals.